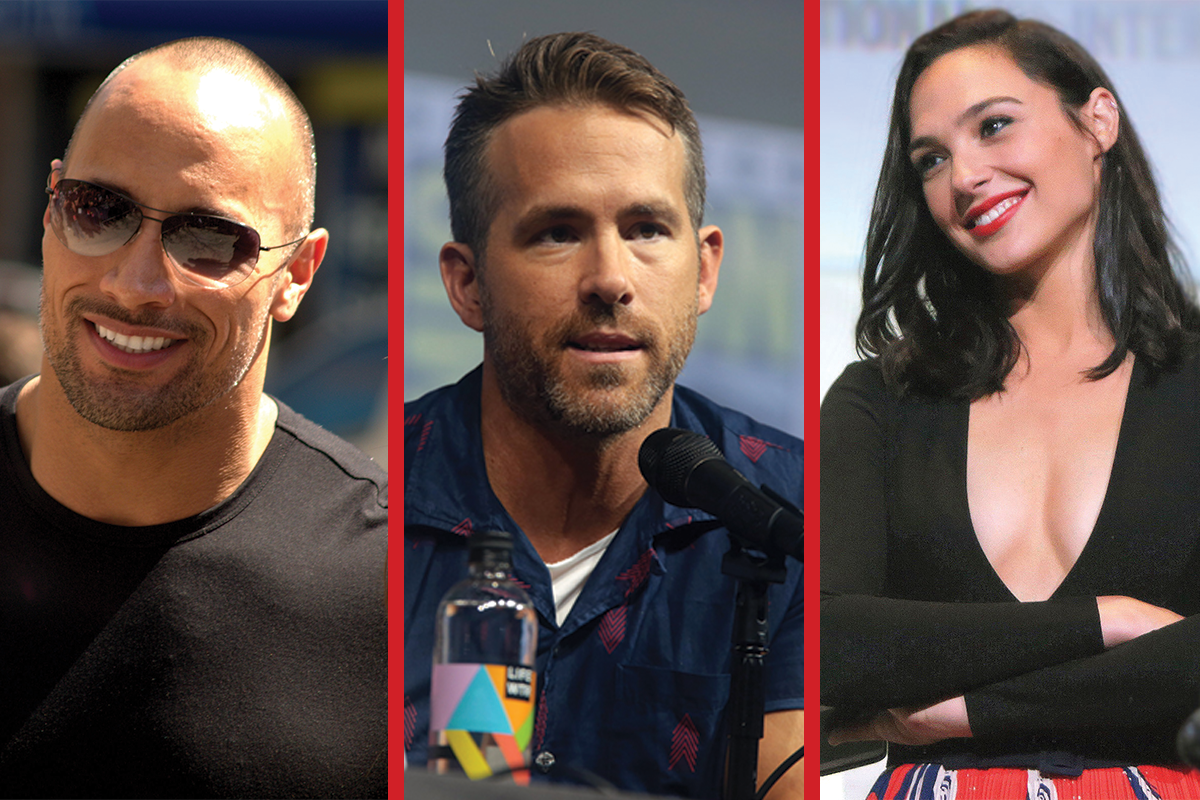 Stars of Deadpool and Wonder Woman with The Rock starred together in a movie on Netflix for the first time! Award-winning producer Rawson Marshall Thurber wrote and directed the film.

Red Notice came with a massive production price tag... possibly as high as $300 million. Initially, it was subject to a huge bidding war from various Hollywood studios when Thurber pitched it in 2018.

Through the first ten days on Netflix... the action-heist movie Red Notice was already the streamer's second most-watched movie of all time with 277.9 million hours clocked.

Then, on Netflix's second week of its "most-watched" film charts, the streamer reported:

Red Notice was also a sensation in Samba TV... pulling in a remarkable 4.2 million views in its Friday-Sunday debut. The film even beat Marvel's Shang-Chi and the Legend of the Ten Rings.

The plot of Red Notice involves a strong desire to search for "Cleopatra's third egg."

The film has three big names attached to it. However, the real focus of the film is on two of them...

First is Dwayne Johnson, a cop, who wants to clear his name after getting set up. Second is Ryan Reynolds, a con man, who was the former "number one art thief. He wants to claim his title back after being outsmarted. The two men are on the same side but with very different perspectives.

Throughout the film, these two are working together to stop Gal Gadot... who is their number one threat.

There's also a tango between The Rock and Wonder Woman. Then, there's an Ed Sheeran Cameo... and that's everything you need to know!

In short, it's the kind of superfluous glossy action comedy you want to watch on a big screen. Too bad that's probably not going to happen... unless you live near a small town with a relatively sizable independent movie theater.

The three stars are already comfortable with each other because they've known each other for years. They enjoyed working together on set.

"I will say I had an amazing dance partner (Gadot). She's very smart and I've known for 10 years," Johnson said in an interview with Jimmy Kimmel.

"This is amazing!!!! What can I say, you guys are the best and the reason why we make these films. So grateful and excited!!! Congratulations to Netflix and to the entire Red Notice team," Gadot was proud as she posted on her social media.

Red Notice aired last November 18 and has been streaming for almost one month. The film has already received a lot of good word-of-mouth from tons of viewers.

The bromance between Dwayne Johnson and Ryan Reynolds in the film #RedNotice WAS EVERYTHING pic.twitter.com/pQjcIRbQ7J

Ed Sheeran trying to fight with guitar was easily the best part of Red Notice. Didn't expect him to be there#RedNotice pic.twitter.com/pykQNtmpUU

The weekend wasn't so bad, Netflix had my back with some dope movies one of them is #RedNotice 😍 I enjoyed every minute of it, the plot twist towards the end of the movie 🤯 I didn't see that one coming 😳

If you want to get some good laughs with your friends and family during the weekend... then you gotta watch this movie! You'll see why fans are loving Red Notice right now. Watch the trailer if you haven't: